JAMES RIVER, NS – Dylan Blenkhorn picked up his third victory of the 2018 Parts for Trucks Pro Stock Tour season by winning the Lucas Oil 150 at Riverside International Speedway on Saturday night. Blenkhorn made the pass on Donald Chisholm (Antigonish) with two laps to go for the win after Chisholm had led most of the race, for 116 of the 150 circuits.

Blenkhorn got enough of the nose from his No. 67 car under the rear of Chisholm’s car to loosen him up and Blenkhorn bolted ahead, holding on for the win. Chisholm finished second. Greg Proude (Springvale, PE) tied his best finish of the season finishing third and completing the podium. Craig Slaunwhite (Terence Bay) and Dylan Gosbee (Cornwall, PE) also had solid runs at the Lucas Oil 150 and rounded out the top five respectively.

Ashton Tucker (Lyttletown, NB) and John Flemming (Halifax, NS) were unable to start the race due to mechanical issues. 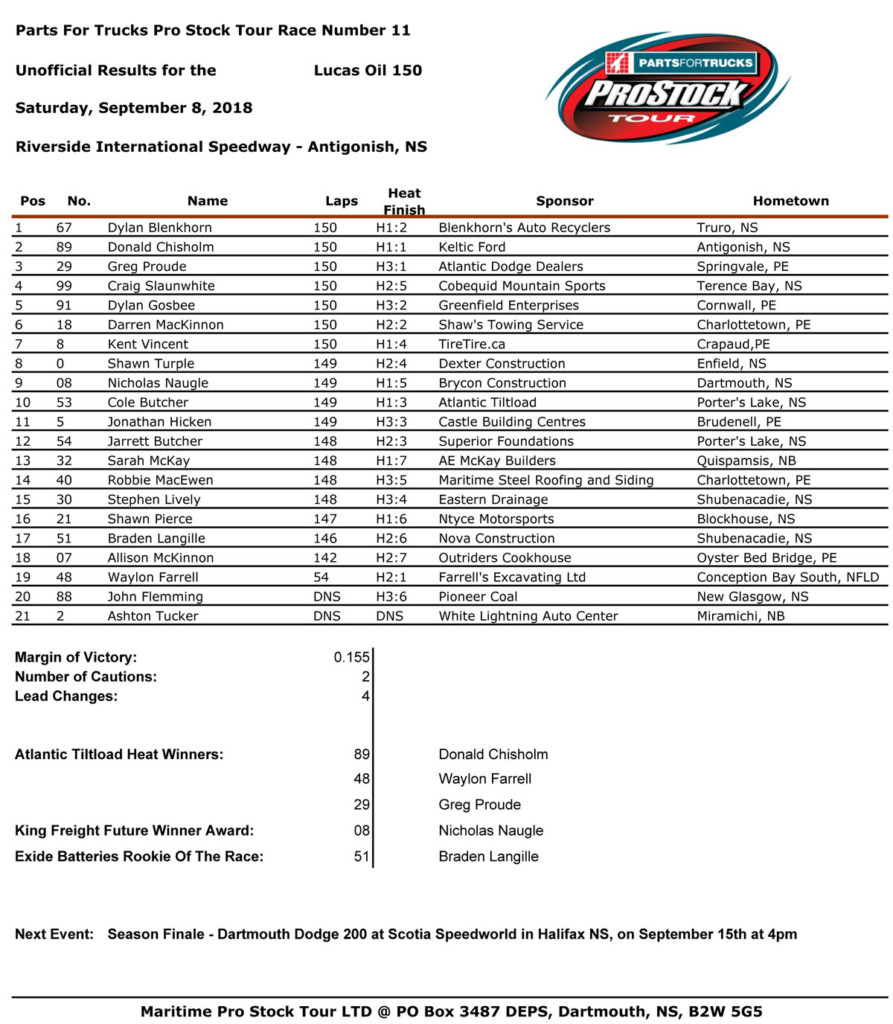 The Parts for Trucks Pro Stock Tour will close out the season next Saturday at Scotia Speedworld. The Dartmouth Dodge 200 will decide who takes home the prestigious championship and the $10,000 cheque. Don’t miss the Dartmouth Dodge 200 next Saturday, September 15th at 4:00 PM. Tickets available at the gate on race day (cash only). For complete event information and ticket prices please visit www.scotiaspeedworld.ca or www.maritimeprostocktour.com

About the Parts for Trucks Pro Stock Tour:

The Parts for Trucks Pro Stock Tour (PST) is the highest level of stock car racing in Canada. The Tour is recognized in the industry as one of the healthiest stock car racing series in North America. PST visits four tracks throughout the Maritimes during its May through September season. The Parts for Trucks Pro Stock Tour is owned and operated by Maritime Pro Stock Tour Limited. For more information call our administration office at 902.481.2531 or click www.maritimeprostocktour.com. You can also follow us on Twitter at www.twitter.com/prostocktour  and like us on Facebook at www.facebook.com/prostocktour.