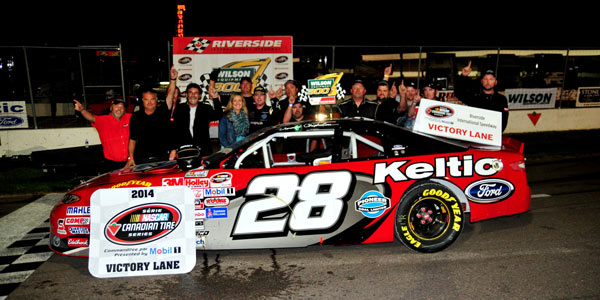 The victory for Chisholm, from Antigonish, came in his 16th career start. A part-time competitor since 2007, he became the 15th different winner in Canadian Tire Series history.

Chisholm, whose family owns Riverside, captured the victory less than two months after his father and track founder, John, passed away. Chisholm also earned his first career pole earlier in the evening.

Chisholm was followed across the finish line by only three other lead lap cars: Alex Labbe, D.J. Kennington and Andrew Ranger. Both Kennington and Ranger passed Chisholm in the closing laps to rejoin the lead lap.

Jason Hathaway appeared poised to defend his Riverside win from a year ago. He was cruising in the lead when he collided with the spun Flemming car while navigating lap traffic on Lap 240.

Chisholm’s win was a popular one with congratulations coming his way from all over including 2012 NASCAR Sprint Cup Series champion Brad Keselowski and 2013 NASCAR Camping World Truck Series champion Matt Crafton (both IWK 250 alumni), as well as from several fellow drivers from both NASCAR and the Parts for Trucks Pro Stock Tour, on which Chisholm competes regularly.

Riverside International Speedway, and Donald Chisholm, are back in action Sunday for the Ron MacGillivray Chev Buick GMC with time trials at 1:20 p.m. and racing at 2 p.m.

The Canadian Tire Series will return to action with the Pinty’s presents the Clarington 200 on Aug. 31 at Canadian Tire Motorsport Park in Bowmanville, Ont.