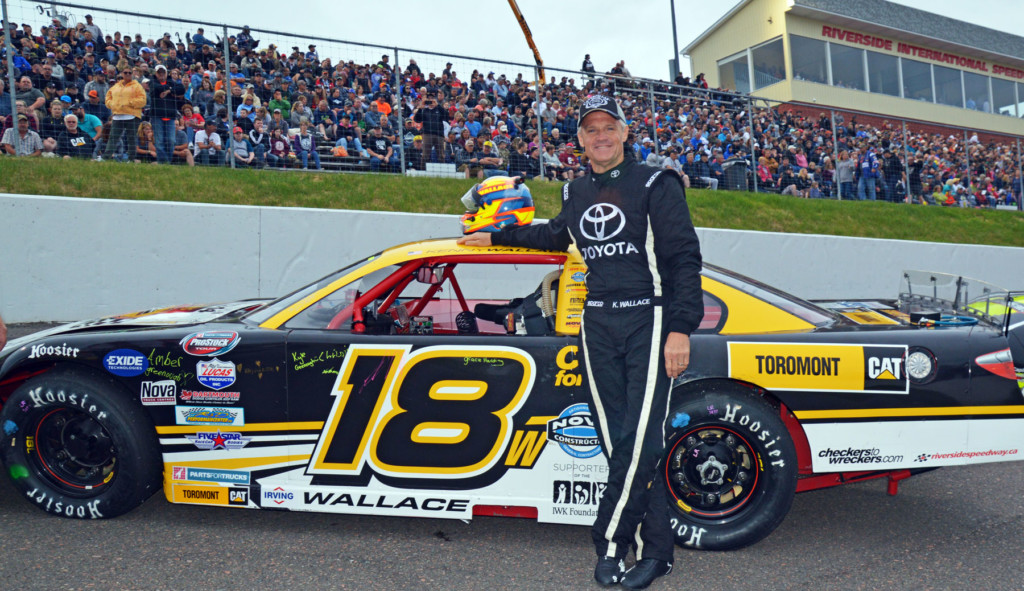 Kenny Wallace, former NASCAR driver and television broadcaster, is returning to Riverside International Speedway on July 20 for the IWK 250 Presented by Steve Lewis to defend his win last year.

“I had the time of my life last year,” said Wallace.”The whole weekend was an incredible experience. Besides being a great event, it does good things for the IWK children’s hospital; being able to spend time with them was an honor.  And the fans were extremely good to me. We had a great car and a great crew. I loved the tailgate party; it was fun to party with the fans.”

“And I’ll never forget the ending,” continued Wallace. “I had a good car, got to third and really thought I had a shot at the win, and then it was over. I was happy with that. And then we found out the top two finishers carburetors didn’t pass tech. They were disqualified and we got the win. I want to race those guys again.”

“We’re thrilled to have Kenny back with us this year,” said Paul McLean, general manager of Riverside International Speedway. “He was a huge hit with our fans. He has such a big, fun, personality. When he got in the car he was all business and it was fun to watch his skill as he moved through the field. And we’re especially excited to have Kenny help us celebrate our 50th-anniversary.”

Weekend Passes for the IWK 250 Super Race Weekend will be available online starting Wednesday (Feb. 20).  The value-packed Weekend Pass includes admission for the IWK 250 TestFest and Tailgate Party on Thursday, July 18, the NAPA Sportsman Series Henry’s AUTOPRO 100 and Maritime Legends Challenge on Friday, July 19, and the IWK 250 presented by Steve Lewis on Saturday, July 20. Pricing can be found here.

Wallace will again drive a car out of Antigonish’s Nova Racing stable as a teammate to Donald Chisholm, winner of the 2016 IWK 250. During his stay in Nova Scotia, Wallace will visit patients and their families at the IWK Health Centre in Halifax, as well as make scheduled appearances at the track where fans can meet him and get autographs.

“Riverside is a beautiful facility,” continued Wallace. “I think what impressed me the most, other than the people, was how well kept and clean it is. I was wowed when I got there last year, and then I realized there were 40 good cars entered in the race, and then I realized I was going to have to qualify my way in. The IWK 250 is a legendary race so I wanted to do good, especially for those kids whose names were on the car. We worked hard with the crew and, honestly, it took me a bit to settle into an asphalt car. Even though I have raced those cars a lot, I’ve been driving mostly dirt cars in the last few years. So the practice sessions were key to me getting up to speed.”

Fans should tune in to the next edition of Riverside Victory Laps, a podcast which will drop later this week and feature Kenny Wallace and Riverside owner Donald Chisholm, both discussing the IWK 250 with series host Dylan Langille. Victory Laps is available at www.riversidespeedway.ca and on iTunes.

Wallace, a native of St. Louis, Missouri, has 905 starts in NASCAR’s top three series and holds the all-time record for the most starts in the XFINITY Series, showing his longevity in the sport. He retired from a  25-year NASCAR driving career in 2015 after scoring nine wins in 547 XFINITY Series starts, one of which came at Bristol Motor Speedway (TN) – which Riverside’s 1/3-mile oval is modeled after. Wallace retired from his television career at the end of the 2018 season to become a full-time racer again, focusing mostly on dirt racing, at short tracks throughout America.

Wallace is the son of a well-known Midwest racer, the late Russ Wallace, and brother of fellow NASCAR racers Rusty Wallace and Mike Wallace. Kenny Wallace started his racing career as a fabricator for Rusty before moving into the driver’s seat himself. He won the first race he ever entered, in 1982, in a street stock. In 1986 he raced with the American Speed Association (ASA) winning rookie of the year honors. In 1988 he got his break in NASCAR driving for Dale Earnhardt (Sr.) in the XFINITY Series at Martinsville Speedway (VA) where he finished seventh.

With his win last year, Kenny Wallace joined Regan Smith as the only guest drivers to take the checkers in the IWK 250. Other NASCAR racers that have challenged the regions best in the event include Aric Almirola, Marcos Ambrose, Matt Crafton, Ricky Craven, Brad Keselowski, Joey Logano, Mark Martin, and David Reutimann.

Celebrations for the 50th anniversary at Riverside will be year-long and highlighted at the IWK 250 Super Race Weekend.

Riverside Speedway opened in 1969 under the helm of Antigonish businessman John Chisholm. It was sold in 1989 and bought back by Mr. Chisholm late in 2005, rebuilt in 2006 and rebranded Riverside International Speedway. For 50 years, the popular 1/3-mile high-banked asphalt oval has provided generations of race fans with some of the best stock car racing entertainment in North America.

Fans can keep up with Riverside news all year long by subscribing to the email newsletter, and by following social media accounts on Facebook (riversidespeedwayns) and Twitter (Riverside_NS).

For 50 years, Riverside International Speedway has been recognized as a premiere stock racing facility in Canada. The 1/3-mile high-banked asphalt oval roars to action several times a year for special events. It is the home of the IWK 250 – widely known as the best stock-car race in Canada, and of the Bumper to Bumper 300 – eastern Canada’s only NASCAR event. Located in James River, between New Glasgow and Antigonish, the facility is easily accessible at exit 30 on Trans Canada Highway 104. For more information please visit www.riversidespeedway.ca or call 902-863-2410.