Fans who are at Riverside International Speedway for the IWK 250 Super Race Weekend will be able to experience Riverside and Canadian stock car racing history. Two vintage restored race cars made famous by the legendary Don Biederman will be on display in the midway area of the grandstand on July 13 and July 14.

Don Biederman at Riverside Speedway in 1977; this is one of the restored cars which will be on display at the 2018 IWK 250.

One of the cars, a Chevy Nova, will make its first appearance east of Ontario since being restored, courtesy of its current owner John Hutchins and well-known Canadian motorsports photographer Dave Franks. In 1977, the “Burger King Nova” as it became known, won two of the biggest short track races in North America, the Oxford 250 at Oxford Plains Speedway in Maine and the Maple Leaf 250 at Cayuga Motor Speedway in Ontario. Later that year, Biederman entered the car in the inaugural Riverside 250 (now known as the IWK 250) but after finishing second in the first 125-lap segment, he was involved in a crash in the second half. 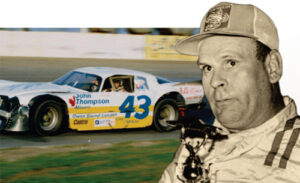 The other car is the winner of the 1981 edition of the Riverside 250, the third of three consecutive wins for Biederman in the event, second on the all-time wins list. It is a Chevrolet Camaro, “the John Thompson car”, and will be at Riverside for the IWK 250 on loan from the Maritime Motorsports Hall of Fame and Dave Franks, along with other Biederman artifacts.

While Biederman (1940-1999) was from Ontario, his connection to the east coast and particularly Riverside Speedway was strong, well-known through his many racing appearances and because of his hard-nosed character on and off the track. He was the first Canadian to compete full-time in NASCAR’s premier division, in 1967, it was then he became known as “Daytona” Don Biederman, a moniker that stuck with him for the rest of his racing career. He built race cars and drove them for a living, practically unheard of then, and most weeks raced five nights starting Wednesday and traveling to different tracks nightly until Sunday.

Behind the scenes, Biederman quietly helped fellow competitors with parts and advice, and also donated time and equipment to race car restoration projects. In spite of his often cantankerous demeanor, he was highly respected in racing circles throughout North America for his passion and dedication. His mere presence at a track was cause for excitement. Don Biederman’s accomplishments in stock car racing were acknowledged formally in 2001 when he was posthumously inducted in the Canadian Motorsports Hall of Fame.

Riverside International Speedway is celebrating its 49th birthday in 2018; besides being one of longest running and top stock car racing facilities in Canada, Riverside is respectful of its history and that of Canadian motorsports. Facility management wishes to thank John Hutchins, Dave Franks, and the Maritime Motorsports Hall of Fame for making this tribute to a legendary racer possible as part of the IWK 250.

The IWK 250 Super Race Weekend kicks off Thursday, July 12 with IWK 250 Test Fest and a Tailgate Party featuring Canada’s east coast acoustic party band, Signal Hill. On Friday, July 13 it’s the Henry’s AUTOPRO 150 for the NAPA Sportsman Series and the Maritime Legends Challenge for the Maritime League of Legends. Saturday, July 14 it’s the IWK 250 Presented by Steve Lewis and featuring Kenny Wallace, one of NASCAR’s most popular driver personalities and a member of the FOX Racing broadcast team.

Thirty-seven top drivers have already entered this year’s IWK 250 coming from six provinces and two states. Besides Wallace, the region’s best will be challenged by two NASCAR Pinty’s Series drivers from Ontario, Jason Hathaway and J.R. Fitzpatrick, and Maine’s Cassius Clark. Heat races and a B Feature will set the field for the IWK 250 where each and every driver will have their sight set on winning the $10,000 first prize and the custom-made IWK 250 trophy, and especially in seeing their name engraved on the perpetual trophy for the event, the John W. Chisholm Memorial Cup.

Tickets are now available for the IWK 250 Super Race Weekend and will be available at the gate on the day of the events. Anyone planning to camp at Riverside over the IWK 250 weekend who does not have a reservation is encouraged to make alternate arrangements as the track campsite is full.

Riverside International Speedway is recognized throughout North America as a top stock car racing venue. Founded in 1969, the family-friendly facility boasts a 1/3-mile high banked asphalt oval which roars to action several times a year for thrilling door-handle-to-door-handle special events including the IWK 250, widely known as the most anticipated stock car race in Canada – and the Bumper to Bumper 300, eastern Canada’s only NASCAR Pinty’s Series event. Located in James River, between New Glasgow and Antigonish, the facility is easily accessible at exit 30 on Trans Canada Highway 104. For more information please visit www.riversidespeedway.ca or call 902-863-2410.

The Stage is Set for Saturday’s Summer Sizzler