JAMES RIVER, NS – When defending NASCAR Camping World Truck Series champion Matt Crafton decided to enter the IWK 250 he said he was hoping the event would bring back lots of great memories from his short track days in his home state of California. With 27 of the best short track racers in eastern Canada set to take Crafton on at Riverside International Speedway this Saturday one can only hope (for him) the competition in California was stout.

Crafton (Tulare, California) becomes the eighth NASCAR celebrity driver to enter the IWK 250 in the past eight years and on only one occasion have any of his peers beat the locals to win – that was Regan Smith in 2008. As a matter of fact the average finish for the NASCAR guys has been seventh, a number Crafton will be looking to make better – while the regional racers will be looking to make it worse.

Along with veteran racers the PST brings with it talented rookies like Dylan Blenkhorn (Truro) who has turned heads with two wins already this season, only his second year of full-time pro stock racing.

Local favourites Donald Chisholm (Antigonish) and George Koszkulics (New Glasgow) will be looking for their first IWK 250 wins. While Pictou’s Rollie MacDonald will not be behind the wheel, he will enter a car driven by Colby Smith, the 2011 Napa Sportsman Series champion and a multi-time sportsman winner at Riverside.

These guys and every other driver on the track will all want the beautiful, unique, IWK 250 trophy – and their share of the $100,000-plus purse just as much as Crafton so the stage is set for one of the best IWK 250’s yet.

Besides the accolades and possible winner-take-all total of more than $16,500 every driver in the IWK 250, except Crafton, will be battling for championship points on the pro stock tour.

Flemming, the defending series champion, leads the current standings at 997 by a slim five markers over Tucker, who sits just five ahead of Turple. Blenkhorn is fourth, 30 spots out of first and PEI’s Greg Proude fifth, three behind Proude. The IWK 250 marks round seven of 12 on the 2014 Parts for Trucks Pro Stock Tour and, with the rainout in June, the first time the series visits Riverside this year.

Crafton will drive the Cat Car for Kids fielded by Nova Racing shop and as a teammate to Chisholm and Koszkulics.

(based on advance registrations for event)

The IWK 250 Super Weekend kicks off Friday with the season opener for the Napa Sportsman Series and the Maritime League of Legends will also be on hand for the Maritime Legends Challenge.

A limited number of campsites remain available in IWK 250 Town; advance permits are required for all overnight parking this Wednesday to Sunday at Riverside International Speedway.

For tickets, camping information, schedules, entry lists (for all three divisions), and everything else you need to know about the IWK 250 Presented by Steve Lewis Auto Body please visit our event pages – Friday – Saturday.

The IWK Health Centre Foundation helps sustain excellence in specialized care at the IWK for all Maritime families. Last year our generous donors contributed over $10 million to the areas of greatest need at the IWK, including neonatal and pediatric intensive care, women’s health and mental health services for children and youth. Funds raised also support world-renowned researchers and the purchase of modernized technology and equipment. Together with its donors, the IWK Foundation supported more than 16,000 inpatient visits and nearly 300,000 outpatient and emergency room visits in one year. Visit www.iwkfoundation.org for more information.

Riverside International Speedway is recognized as a premiere stock car racing facility in Canada. The 1/3-mile high banked asphalt oval roars to action several times a year for special events. It is the home for eastern Canada’s only NASCAR event, and of the IWK 250 – widely known as the best stock car race in Canada. Located in James River, between New Glasgow and Antigonish, the facility is easily accessible at exit 30 on Trans Canada Highway 104. For more information call 902.863.2410 or click www.riversidespeedway.ca. 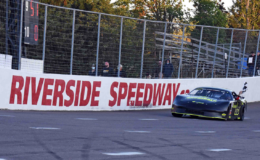