We are proud to announce Joey Logano, one of NASCAR’s brightest young stars, as the celebrity guest driver of the 2012 Cat Car for Kids in the IWK 250.

Logano is the youngest winner in two of NASCAR’s top three divisions (NASCAR Sprint Cup Series, NASCAR Nationwide Series, and NASCAR Camping World Truck Series). 2012 has proven to be a stellar year for the young driver with his scorecard including…

Logano, now 22, started racing at six years of age driving quarter-midgets in his home state of Connecticut. He raced and won in several divisions as he honed his talents. 2008 was a marquis year for Logano with his first starts in all three of NASCAR’s top divisions: Sprint Cup, Nationwide and Camping World Truck Series. His first Nationwide win was in 2008 and his first Cup win in 2009.

About the Cat Car for Kids The Cat Car for Kids is presented by Atlantic Cat. Now in its fourth year the program provides an integral link between the IWK 250 and the IWK Health Care Centre with a pre-race visit to the hospital by the celebrity driver of the car, and the car. Patients and their families are invited to sign the race car as co-sponsors of it along with Atlantic Cat. The event has become one of the premiere in-house annual attractions at the facility.

About the IWK The IWK Health Centre, while located in Halifax, Nova Scotia, is an essential resource for women, children, youth and families from across the Maritimes and beyond. Each year, thousands of Maritime children and women come to the IWK requiring emergency care, surgery for critical illnesses, and inpatient care for ongoing medical conditions. 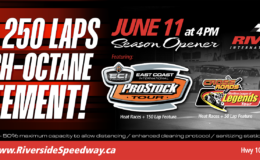